Difference between Native and Hybrid apps – A Complete Guide 2022

Mobile app development has become the norm. Businesses are recognizing the potential of this segment to become successful brands.

Could you imagine? Research by Statista reports the quarterly number of mobile applications downloaded in 2022 is 28.3 billion on Google Play Store, and 8.5 billion on the Apple app store.

The numbers are significant. But, do you notice the massive difference between the downloads?

Both the operating systems are great, and in demand, so why not produce applications for both of them? Why does Hybrid (iOS & Android) app development clash with native app development? – We are going to discuss everything about this.

This is one of the common challenges among thriving businesses. Therefore, deciding which mobile app platform would meet their requirements, should pass through following questions first:-

This blog post helps you understand the differences between hybrid and native apps. It also explains the pros and cons of each platform to help you decide which is best for your mobile app project.

What is a Native mobile application?

What is a hybrid mobile application?

What is a Native mobile application?

Native mobile applications are designed to be used on a specific platform or device. Because they are specifically designed for one type of phone and its operating system, they can use the phone’s special hardware and software.

In contrast to mobile cloud applications or web applications, native applications have better performance and access to the latest technologies like image processing.

Native mobile applications are those that are designed to run on a specific platform, such as iOS or Android. They tend to have fast execution and a high degree of accuracy. Their user interface controls and layouts are also more accessible, as well as faster. However, an iOS-based app will not run on Android, and vice versa.

This means that you will have to create different versions of your software for each platform, which can be expensive and require a larger team size if you want to release your software on both iOS and Android simultaneously.

Following are the primary characteristics of a native mobile application:-

What is a Hybrid mobile application?

Hybrid development allows you to write code once and have it work on many different platforms. This is done by combining the best features of both web-based apps and native apps.

Hybrid apps are built with technology that is common on the web, like HTML5, CSS, and JavaScript. But they also use native plugins to do things that regular web apps can’t do. This makes them work just like a regular app, but they don’t need to be coded twice.

This means that your app can use features of the device like the camera, fingerprint sensor, facial recognition, and file storage. You only need one codebase to do this, which makes it cheaper to develop and maintain than a native app.

Hybrid apps are created by combining a web view with separate packages that can be submitted to app stores. This gives the appearance of two apps, but in reality, there is only one.

The following are the top three hybrid app development frameworks:-

Hybrid apps are similar to web apps, so they need a good network connection to work well.

Because of their architecture, hybrid mobile apps rely on plugins to access the features that are built into the mobile device.

Many businesses face the common challenge of deciding whether to develop a native or hybrid application. Both options have benefits, but the best option for a particular business depends on its specific requirements and purpose.

Hybrid apps have been criticized by the native app community. However, with new technology and hybrid apps becoming more popular, there are a few worth highlighting.

1) The user experience could be better. People have different opinions about what is good, so it is a personal preference. The UI looks like the device, but this makes it difficult to customize for your brand. When creating a hybrid app, it is important to have a partner with strong UI and design abilities. This will ensure that the user experience is positive and effective. Some of the most popular hybrid apps, such as Twitter and Instagram, are developed this way. Users often find the experience to be on-par or better than native apps.

3) Hybrid applications have poor performance because they rely on Apple and Android web browsers to operate. Mobile devices didn’t have the power to create truly polished web experiences until very recently. This is no longer the case with more advanced devices, so hybrid performance for most applications is now comparable to that found in native apps. 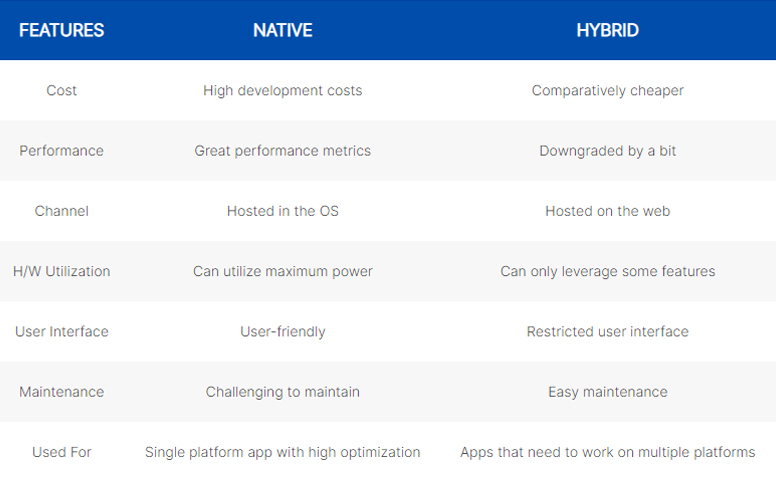 Based on user experience

Native applications provide the best user experience because they are specifically designed for a specific app store. They take into account the hardware capabilities and screen size of the device. In contrast, hybrid apps have one code base for all platforms and cannot offer good user experiences. This is in comparison to native apps.

Based on cost and time of development

Hybrid applications are less expensive to develop and require less time. Furthermore, hybrid apps are simpler to maintain. They have a single code base, whereas native apps have multiple code bases because they are tailored for different target platforms.

Based on the platforms you want your app to operate on

If a company wants to put its app on multiple platforms, like Android, Apple, and Windows, it can make a website or hybrid app. The company can develop and publish a website or hybrid app with a single code base. It can then distribute that software to various platforms. Native applications, on the other hand, require different programming for each platform, such as different languages for different types of devices.

Based on the utilities the app offers

For businesses looking to launch a paid app on the App Store, native apps are the best option because they have a better user interface. Free applications may be built using a hybrid app, which is less desirable from a user experience perspective.

Based on app distribution across various app stores

If a company wants to distribute its app through the App Store, it must develop a native mobile app instead of a mobile-optimized (responsive) web application that may be accessed through the device’s web browser.

Based on device features accessibility

If you want to use your phone’s features, like the camera or GPS, you can go with both native or hybrid app. Just avoid web app as they cannot easily use those features on phones.

Based on developers’ availability

If your company needs to be on many platforms, but you don’t have developers who know how to make apps for mobile devices, you may want to consider making a hybrid mobile app. This means that you will use the same programming skills you know, like JavaScript, HTML, and CSS, to make an app that works on multiple platforms.

Different methods have different benefits and drawbacks. A native approach will often provide the most benefits for a company’s bottom line. However, it is still important to consider the advantages and disadvantages of hybrid and native approaches.

Hybrid applications are very appealing because they are fast to market, use one codebase, and work on multiple web platforms. However, they can be difficult to maintain over time as users complain about different elements of the user interface or performance issues.

Native apps have specific functions that are unique to the type of device on which they run. Additionally, native apps offer the best security, performance, user interface and access to all native APIs.

In other words, the company may have to spend more money up front, but in the long run they will save time and money by offering a great user experience and an industry standard app performance.

Each approach has its pros and cons, but a native approach will have the biggest benefits for a company’s bottom line.

What are your opinions on this? Would you prefer a Native or a Hybrid app development? Connect with our team and share your requirements. 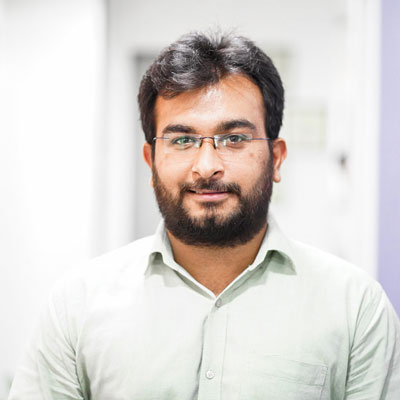 Six years of experience with Android has made him believe that the way to a client’s heart is nothing but extraordinary mobile apps.