Today, an extensive number of programming languages are being used worldwide, each with its own purpose, complexities, benefits and quirks. However, it is JavaScript that has left an ever-lasting impression on the web by emerging as the most popular programming language for 7 times in row edging out dominant mainstream rivals like Java, Python, PHP and C#.

Yes, you heard that right! 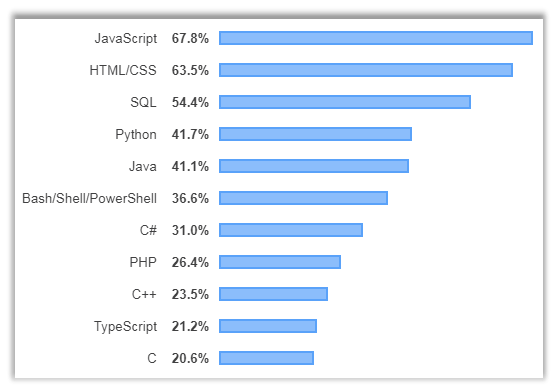 The reason lies in its versatility and flexibility. Not only is JavaScript regarded as the language for traditional client-side use, but it is also now being used for server-side applications along with native mobile app development, desktop apps, machine learning for automation, progressive web apps and more.

Well, there are a huge number of JS frameworks and libraries available at your disposal with new releases every now and then which makes the task of choosing the right framework for your next project a daunting task. To help you out, we have curated the list of top 4 JavaScript frameworks for 2019.

Developed and open sourced by Facebook in 2013, it quickly rose to prominence for web applications that involve dynamic handling of data. This highly efficient & declarative JS library is used to build interactive UIs for single page applications while making use of virtual DOM that helps it to integrate with any application. It also adopts JSX to structure components and develops SEO-friendly web pages as compared to other JS libraries/frameworks.

Holding the second place on top JavaScript frameworks for 2019 is Vue.js.

Released in 2014, the framework has done wonders within a short span of time. Most commonly used to develop business apps, the framework uses a lightweight and progressive JavaScript library with the advanced Virtual DOM functionality.

One of the major benefits of using Vue is its ability to tracks components’ dependencies automatically during its rendering. It also informs the system about the components that need to re-render during state changes.

AngularJS is considered to be one of the most powerful open source frameworks. It is an “all-in-one” solution that aims to provide developers with every possible option. Developed and maintained by Google, Angular has been following the schedule of releasing new versions bi-annually.

It’s a client-side technology that provides a powerful combination of HTML, CSS and JavaScript. Moreover, developers can extend their HTML syntaxes as per the requirements of the application’s components.  Further, the latest version, Angular 2, has added to the popularity of this framework with notable enhancements in performance and user experience.

All three frameworks or libraries are quite popular today and are backed by a vast team of developers. If you may ask the right choice, then, we’d probably say it depends upon your business type and programming style as each framework involves a different development philosophy. Whatever the case, each one of them, be it React, Vue or Angular aren’t going anywhere soon.